Last Sunday we hit the King County Master Gardener Spring Plant Sale. I was a lot of fun. There were vendors from nurseries lining a walkway and a couple of big tents where the Master Gardeners sold all their starts. I did my part supporting the MGs by purchasing several plants for the front bed.  I talked with the nursery people and got some suggestions for what to plant in the dry shade under our Doug fir. I just got them all planted this afternoon. 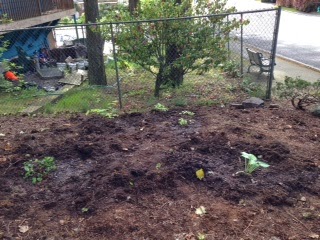 I don't have pictures of them, but I bought two different kinds of Rudbekia species and planted them along the sidewalk. And, in the corner by the driveway, I planted the shasta daisies I inherited from Alan's aunt.

Of my plants from the MG sale, I got a hosta "June", which I was told the slugs really like, so I might have to keep an eye on it. 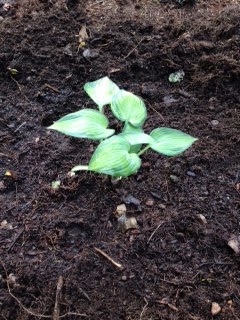 Apparently hostas grow really well anywhere ferns grow. So if we don't take out any trees I might have to buy a few more to replace some of our failing shrubs. 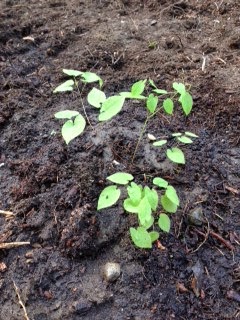 We planted them on the downhill side of the slope with the hope that they would spread a little and cover more of the space. One or two of the plants at the show still had flowers on them. They were small, but cute. We were going for more of the green ground cover effect than for the flowers.

We also got one Disporum smithii to plant in deeper shade back towards the tree. 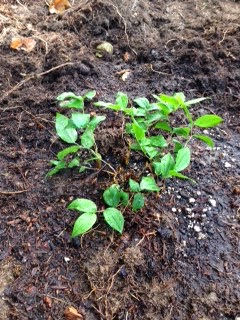 The plant card says it's one of the "greats" for dry shade! Sturdy and pest free.  Again, hopefully it will spread in clumps and take up some of the newly exposed planting area.

As you can see in the first picture, there is still a TON of exposed ground. I'm going to sign up for Chip Drop and see if I can't get a free delivery of some wood chips to cover the soil. I'm also going to beg and plead for some alpine strawberries from a couple people we know when the strawberries start sending out runners later this year.

As for the veggies garden, the radishes and lettuce are growing like crazy. 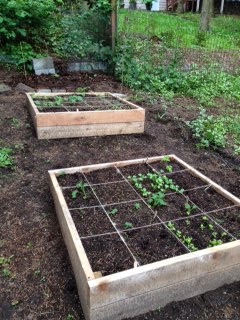 My neighbor was kind of in awe of all the growth. They have new raised beds in front of their west facing house. Their beds get a lot more sunlight than ours, but their seeds are barely up. Maybe spending all that money investing in the compost/vermiculite/peat moss mix was really worth it! From seed I have radishes, lettuce, carrots, and summer savory all growing. The thyme is just starting to sprout, which surprises me since the summer savory is growing in MATS already.  Three kinds of kale and a broccoli got planted a while ago and are slowly doing their thing. And just today I planted a Sungold and Nova tomato. I'm saving a square for a jalapeno, but the rest of the tomatoes and the other peppers will all go in pots. 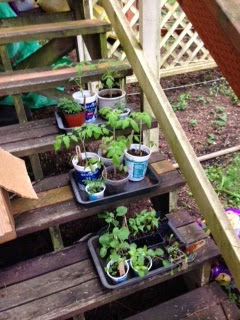 I gave away three tomatoes and some kale to Sarah, and another tomato to my neighbor. We can test the sun vs soil debate!

I've been doing a decent job identifying all the plants in the yard. This is my current plant project. It's the shrub next to the raised beds along the fence. 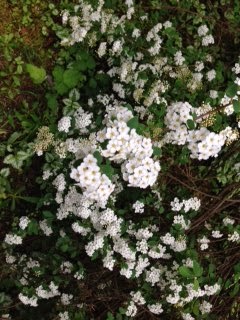 To the Sunset Western Garden Book!! 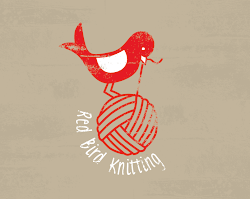